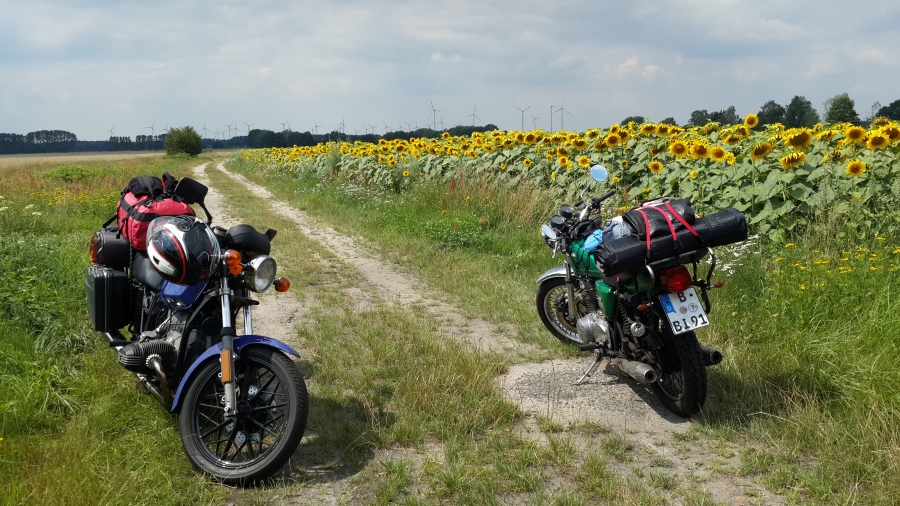 I was broken down, my motorcycle wouldn’t run. We were stranded. Less than a kilometer from home. I knew it was less than a kilometer because we were in front of a shopping center I frequently walk to. Our trip was over before it even began. All the hard work, sacrifices and preparations we had both put into making this trip happen; all for nothing.

But I am getting ahead of myself, let’s start back at the beginning…

“Okay honey, the house is locked, lights are off. I think I will need to stop for gas soon, Kermit is probably low. Ride safe out there!” We kissed, pulled on our helmets and prepared to roll out on our three-week motorcycle trip around Europe. It was a big trip, with a lot of preparations leading up to it, and for the first time (maybe ever) I felt like I was ready. There wasn’t that nagging feeling of, “What am I forgetting???” This confidence should have been a foreshadowing to an imminent blunder. My falls and failures usually happen from the highest peak. I think this is Life’s way of making sure I learn my lesson, and keep my head from getting too big.

We pulled out onto the main street, almost immediately Kermit (my little green, 1979 Kawasaki Z400) started to bog down. I rolled on the throttle a little more, urging him to wake him and go on. The more gas I gave, the more he needed. “Hmm,” I thought, “I guess he needed gas even sooner than I expected.” I was able to coax him to the corner, catching up with Joschi and Lady (his blue, 1979 BMW 650) just before the traffic light turned green. “Hey! I am out of gas. I need to pull onto the sidewalk.” I felt bad, Joschi had packed everything so perfectly precisely, and here we were, so close to home, opening the side bags and fishing out the 2Litre gas can we had brought along for an occasion not quite like this. Kermit doesn’t have a gas gauge, or a reserve, so I always have to guess when he needs to be filled. This gas can was a safety net for faraway lands, and here I already needed it, still in the heart of Berlin. We gave him a drink and geared back up. I apologized a few more times for the inconvenience. And we started up to head out, once more.

But something was wrong. Kermit did not sound or feel right. At all. He hadn’t ran out of gas. Something else was the problem. I could barely keep him running. So before we pulled off of the sidewalk I signaled to Joschi. “Something is not right with Kermit. He feels really rough and he won’t idle.” He came over to check it out. Kermit was coughing and croaking, sputtering and struggling.  We speculated that maybe some grit in the old gas tank had clogged the lines and filter. Or that heavy rain we’d had the day before had gotten into my tank (maybe the old gas cap didn’t seal properly?). My worst-case-scenario-mind went not only to these places, but down further and darker roads. Googling a motorcycle problem is like Web MD’ing a headache; the diagnosis is always cancer.

The fear and frustration of this untimely break down should have had me in tears. But I think I was in the early stages of grief and loss. I was in a blur of denial. While Joschi was revving and looking over Kermit I stood there helpless, grieving the loss of the big adventure that we weren’t going to have. And it was all my fault. At least it had happened so close to home. I could push him back to our apartment and curl up in my bed for the next three weeks. I was being dramatic, and Joschi was being logical; typical.

“Hey, your mechanic is right here, let’s push Kermie there and see if he has any ideas.” My cool, calm, and collected boyfriend suggested. So I pushed, and even though the mechanic was only a block away, I was sweating. The anxiety, leather gear, and morning humidity were not making for a pleasant combination. The mechanic saw the look of despair on my face, came over, gave him a little look-see, while Joschi explained (in German) our predicament. He asked for the key and when he turned Kermit over, he fired right up and purred like his ol’ self. Hallelujah! It was some sort of miracle! This mechanic was a magician!

I smiled with a giant sigh of relief, said thank you at least ten times and put my gear on, again. I walked over to Joschi and Lady, “Honey, what did the mechanic say anyway?”

“He said the choke was wide open.” 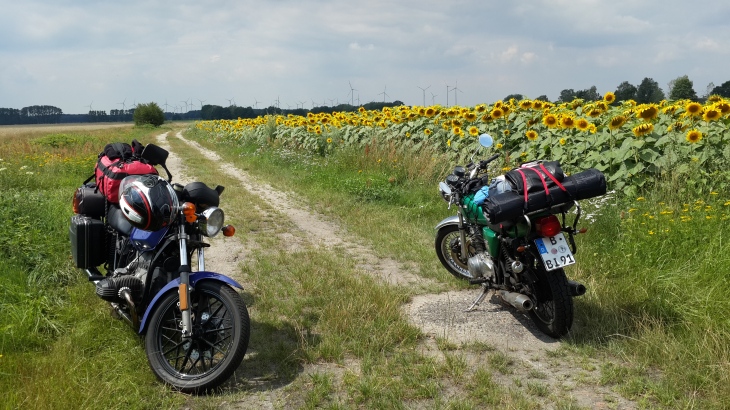 With a restless heart too curious for just one place to call home, I am on a constant search for knowledge, love and adventure. I may make a few wrong turns along the way, but I always seem to end up where I am supposed to be. View all posts by keatynjayne